A tutorial should serve the purpose of teaching basic game mechanics while getting the player excited for what’s to come. This especially holds true for virtual reality games, where the controls heavily govern gameplay. Here, our Food Fight programmer explains how we came up with our in-game tutorial.

For many non-VR games, the controls can be restricted and slowly introduced. This is sometimes achieved without a standalone tutorial. As the player progresses through the game, they unlock more access to the controls and extend their interaction capabilities. VR must be treated differently. Being a new technology with fewer users compared to video game consoles and PCs, a developer can’t assume that a majority of players will know the basics of VR controller navigation and interaction. Thus, the tutorial should show the basics of VR and treat the player as if this is their first VR title.

A VR game can achieve this type of tutorial without boring experienced VR players by including fun interaction elements in the tutorial that tie in with core game concepts. An example tutorial is in VRChat, where players are placed in a room filled with booths that showcase an interaction that can be done in-game. Each booth has a board with text instructions along with pictures of what button to press above the hand-held controllers. This tutorial includes writing on a whiteboard, building with blocks, and even ping-pong. By the time the user goes around and interacts with all the booths, they will have a good intro to VR controls and how to interact with the game world. 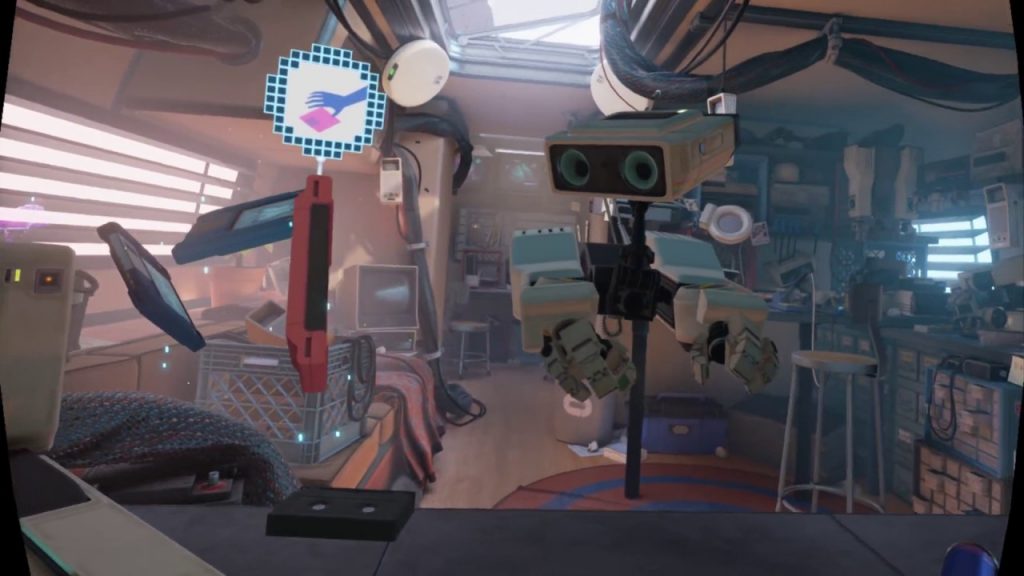 The old tutorial for Food Fight introduced all of the interactive elements required to play the game: picking up, eating, and throwing food. It also allowed the player to face off against the food goblin. For a VR tutorial, it works fine, but more can be done to have an engaging and smoother experience. Fortunately, Oculus has an excellent tutorial for their Oculus Touch controllers called First Contact that we can draw ideas from. The Touch tutorial places the user in a very elaborately designed laboratory with a robot that gives you items to interact with. The beauty comes from the fact that there is no text. All interactions are marked by small pictograms of what the player is supposed to do, along with hints given by the robot itself. These small environmental cues lead to an immersive and fun tutorial.

The old tutorial was broken up by text instructions that follow the player’s view. This blocks aspects of the environment and can seem like a chore. Many players won’t read instructions and will just click through prompts to get to the gameplay. Additionally, the conveyor belt, which at the time was still being tested, is absent from the scene. Learning from the Oculus Touch and other VR tutorials, we can use the foundations of what exists in Food Fight to create a compelling experience.

The tutorial for Food Fight needs to instruct the player on food interaction and defeating the Food Goblin. At the same time, the player needs to understand the tools that extend food interaction in the form of pickups, the conveyor belt, and target practice (to practice aiming food). A pop-up system has been developed for text and pictures to appear above food when needed. This removes the need for most text. Next, food availability can be controlled by adding the conveyor belt to the scene. This will familiarize the player with the speed of the conveyor, while also progressing the steps of the tutorial by producing food when necessary.

The concept of healthy/unhealthy food types will be explained with foods that always stay in their respective category based on the diets that are in the game. For instance, most vegetables will always be healthy, and confectionaries like cakes and cookies will never be a healthy option. We will limit the food selection for the tutorial to dispel player confusion about food type. Applying green borders to foods will help the player in identifying which foods are healthy, while red borders will be used for unhealthy foods.

In conclusion, there’s not much we had to recreate for a much more interactive tutorial. Adding a new pop-up UI system removes mountains of text and will keep the player engaged with the environment. Bringing in the conveyor belt will help pace the tutorial and provide food when the tutorial requires the player to interact with it. Lastly, limiting the food menu and indicating the difference between healthy/unhealthy foods on the conveyor belt with borders will prevent a long list of instructions that the player will have to read. All of this will make for a smooth, streamlined experience that will hopefully get the player excited for Food Fight before they dive in.